After one last check of the carry-on luggage (just the essentials: flat iron, makeup, paperwork and the dreaded, stressed-over cocktail party outfit, in case the real luggage went MIA en route to MCO), and we were off by 5am. The kids opted to get up early and come with us so they could have the chance to say goodbye at the airport ... I thought for sure I'd get some grumpiness from my 9yr old... but maybe he was just too sleepy for the realization that I was really heading to Disney World WITHOUT him! Keep those words in mind though: airport, tiredness, grumpiness... we'll be seeing those again later!

Luckily, after a quick deicing and a small delay, I was off to Orlando. I couldn't wait to land, to finally get off the plane - you see, I was meeting Kaylene right there at the gate. Kaylene and I had a bond forged in tears ... you see both of had been Rejects. Yup, rejects from the Moms Panel... Both of us had interviewed for the panel in previous years (and, I for one, totally blew the interview, talk about nerves... doh!!) and had gotten a dreaded "We're sorry" call....  This year was different though, after all the weeks of stress, of hopes, and of dreams - we both heard the magic words from Laura and Tina:
"We'd like to welcome you to the Disney World Moms Panel"! YESSSS! We made it! Together!!

So, as I got off the plane, I looked around quickly and recognized her! And Jodi from 2009 sporting her bright pink Moms Panel jacket (OK, I was jealous! I want one!!) ! Of course, we had a quick hug and started chatting right off... and for what would NOT be a trend - I didn't even shed a tear !!!

While we were waiting, Allison and Amy appeared! Now of course, we are having our own little party, right there in the baggage claim of MCO! Then, off to ME and Whitney and Jackie AND Karen are all there! What a great way to pass the time waiting for our bus to ... the Contemporary!

As we waited, we started hearing reports that Joel had arrived at MCO and that Amanda A, Suzannah, and Amanda W were all at the contemporary already! I couldn't wait to get going so I could meet them all!

Once we got to the Contemporary, I couldn't wait to check in -- because, the coveted Agenda... which had been kept a secret from us so far... would be revealed in my packet! OF course I had to rip it right open... I was speechless at my official id badge for the weekend 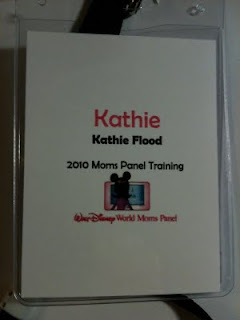 My thoughts ran something like this: "Seriously, this isn't a dream?? I'm really here? Can I stop pinching myself yet??" Of course, that ended up being a theme for the next few days :)

As I was standing there devouring the agenda, and star-gazing at the badge, I spied Joel! Yes, another panelist! Unfortunately, the ME had taken a while to get there, so some of the other Moms were heading off to lunch at Kona... and I'd have to wait until later tonight to meet them... I was pretty bummed, since Amanda A was among them and I was dying to meet her! We had connected early on, after interviews... so I was anxious to finally get to say "Hi" in person!

BUT, my room was ready so up I went to quickly unpack and check things out. The gray rain that had moved into Orlando was sticking around.. and would .. for the next couple of days... 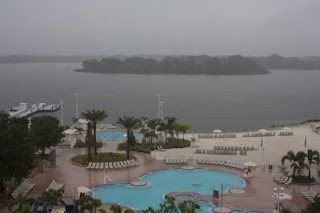 Having been up since 4am, with only a snack of the airline's biscotti and coffee to sustain me, I decided to check out the quick-service restaurant... And, of course, who else would I run into ?? All the 2009 Mom panelists from the airport! So, I had some nice chats with them before they headed off to the Studios, Sci-fi, and the Osbourne lights! They were so nice and welcoming to a new face, it was great to have some company!

Of course, right after I finished eating, I somehow managed to bump into another group of Moms... So, I ended back up in the restaurant - this time with Marc, Terry, Brenna, Amy, Amanda W, Joel, Allison & Jonas! At the next door table were Diane G and Amanda P! Wow, what a great group they all are!  I can't believe how quickly we all started chatting - like long lost friends separated for years!

All too soon, however, lunch was over... and it was time to go get ready for our Welcome Cocktail Party! So, I'll leave you here... since this is so long already... and pick up with our new plans... New plans, since the rain was going to drown us out that night....


I am not a Disney employee.  The postings on this site are my own and do not necessarily represent Disney’s positions or opinions.
Disney Moms Panel 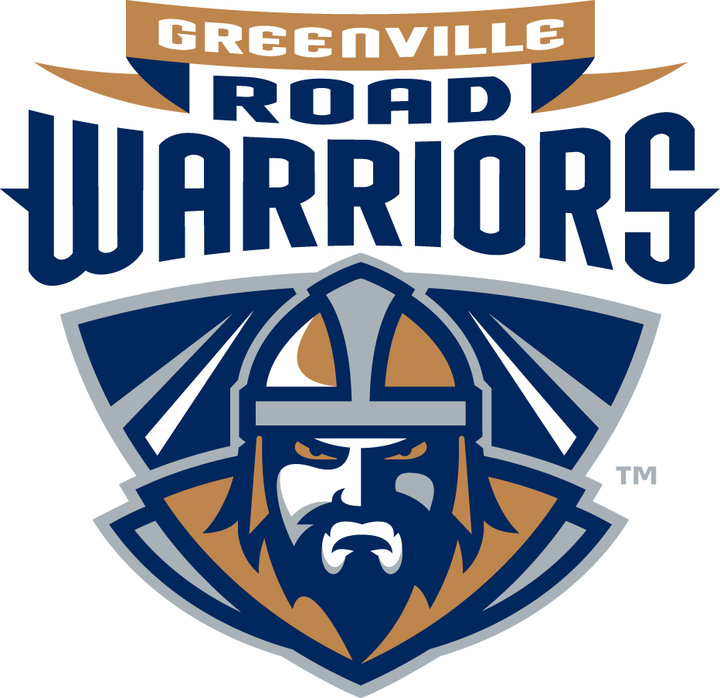