Except, for some reason, I actually woke up. It sunk in... the news the doctor was telling me, the words he said. I had been kidding myself for quite a while. I really wasn't in shape (not any shape at all). Sure, I could function - I was having fun, cooking, eating, and just living day to day. But, along with that, I was tired. My pants didn't fit - in fact, I had a whole shelf of clothes that didn't fit anymore.

Its easy to ignore that. A quick shove to the back of the closet, and Voila. Out of sight, out of mind. Those jeans that fit last year, well lets just hide those under the sweater. You know the sweater: the big, bulky loose sweater that hides the extra few pounds: the FAT sweater.

And so what if my blood test numbers weren't that great: everyone's cholesterol numbers go up with age. Right? Well, that's what I was telling myself... and given America's stats, its almost easy to believe. 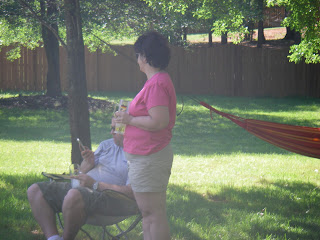 Was I unhappy? Heck, no. If anything, I'd say the opposite. I was perfectly happy. Content. Maybe even happily lazy. YES- Lazy. Sure, I was a working mom. Sure, I had two kids to keep up with, a full-time job, a husband and a house to take care of. But, I could still be lazy.

It really was all all just an excuse. I was too busy. I was young. I wasn't in that bad of shape. I didn't have "time" to exercise. Sure - I had time to watch a movie at night. Or have a beer and nap in the hammock...

Seriously. Even this picture didn't wake me up.

But, luckily for me, that day did come.The one day when I actually did wake up, when I could see clearly. I saw how UNHEALTHY I had become. How complacent I'd become. Sure, I could still function - work, play and be me. But, it wasn't what I really wanted to BE. And worse, if I kept going that way - ignoring me and my health - I'd surely be hurting my family as well.

So, I started making changes. Some big: I became a vegetarian: meat just wasn't going to fit in with my where I wanted my diet and my health to go. Some small: I decided that organics were the way to go whenever we could - our health would thank us for it (even if our wallet won't- LOL).

Then, I joined the Greer Athletic Club. I quickly fell in love with the Group Centergy (think yoga & pilates mixed and set to music) and Amanda's teaching of it... I struggled to go each and every class - well, except for the 5:45 am one - I'm STILL not that dedicated! And I did- for months I didn't miss a single class.

And started running with a goal: the 2010 Halloween Family 5K at the Magic Kingdom in Disney. Hey, it was over a year away when I started running, surely I could do it. I followed the Chubby Jones podcasts. Three times a week we'd run together - me and Mia. It sucked. But, slowly, it sucked less and less... until, there were days when I just didn't feel quite right if I didn't get out and do something for myself each day...

I did something else simple. I kept a food journal. And, YES, there's an App for that! My choice was Lose It! Really - it showed that there was no magic. I had to work to burn those calories. I had to watch how many I ate. I had to DO the exercise so I could log it.

And I did run the 5K. And, you know what - WE even had fun doing it. That's right.  My family & friends ran it too. That makes me happy - very happy. And proud. 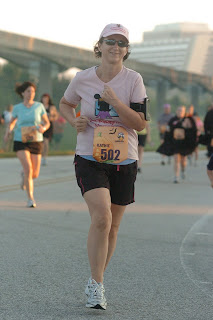 I'm not done yet... to be honest, I won't ever be done... because its taken me a while to realize that health is not a single act. Its not something that can ever be "done" - I'll just keep working at it. Sure, I'm going to stumble, I'll make mistakes, I'll falter (oh yea, I AM going to eat those Christmas cookies AND the Gingerbread Caramel Popcorn). BUT, I'll get back on track because I know what my long term goal is: I want to be healthy for myself and my family. I want to be around, a good long time - I want to be a mom, a wife, and even a grandma someday.

And that makes it clear: exercise and good nutrition are going to be a requirement, not an option... A requirement for every single day - its not going to be something I'll get to when I have "time". I'm going to make time - and I hope my family does too...
Family Goin' Healthy